Today’s Sepia Saturday brings us a prompt image of men working on electrical lines.  It’s a really unique image, I think, and not something I had a perfect match for, but it does open the door to men working which lets me post a really neat series of photos my grandpa Leon Kitko took in 1959.  A train had derailed and he, being much like a nosy neighbor, went down to check it out and possibly get a glimpse of some neat new machinery he might not have seen before.  From the number of photos with the same date stamp, he took (and kept) 8 photos of the event out of a roll of film and filled the rest with random shots of the countryside, his home, etc.  If I assume that he wasted no time getting the film developed and photos printed, the most likely news story I could find was one about a coal car derailment on June 25, 1959 at 10:29am in Lumber City, Pennsylvania.  The event even made the front page of the newspaper!  In their haste, the newspaper didn’t quite complete the caption under the photo either (linked below).  As the story reads, six coal cars were involved in the incident, caused by a coupler being pulled out of one of the cars, dropping to the rails, forcing the cars off the track and tearing up 150-200 feet of the track as well.  Luckily, there were no injuries and it was only coal (not some sort of chemical) so cleanup was somewhat easier, being completed by 9:30 that night.

The photos my grandpa took are really interesting for many reasons.  He’s captured a newsworthy story from a bunch of angles as well as showing the working man at his job.  In one photo, you can see the piles of coal spilled out of the cars.  In another, shovels and buckets lined up along the rails while a man reaches to grab a plate that sets the rail in place.  In two photos, you can see a large piece of equipment rolling in to help remove the cars too damaged to continue on and set right those that could still roll along.  It’s really a rather complete picture of the accident, and I’m glad he was that nosy neighbor who wanted to check out what I’m sure was a big topic of local gossip that week.  As far as working cables from the theme into my post, that last photo of the crane should fit the bill! 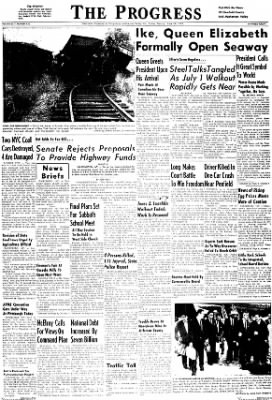