I’ve been on a sewing kick!  Between starting the Spoonflower Instagram Cheater Quilt challenge and finishing this project,  the sewing projects are really keeping me busy.  This project was inspired in part by the Rhianna Indiegogo campaign that was delivered recently.  I love the camera, and the idea that there’s a bag to match is pretty nifty.  The fabric is printed by Spoonflower and is basically a pattern printed on fabric  of the bag complete with markings, directions, and a cute bonus key fob.  In addition to the fabric, there’s a really great tutorial by HappySewLucky here.

Overall, I found the sewing really easy.  Line everything up carefully, follow the directions and it’s a breeze.  One small change I made was to use fusible fleece instead of quilt batting since the instructions didn’t specify the quilt batting thickness (there are a variety of lofts available).  I was able to iron the fleece to the fabric which made it MUCH easier since I wasn’t dealing with extra pins or basting and the fleece then didn’t shift around since it was fused to the fabric.  The fabric info on the Spoonflower site says to order “Upholstery Weight Twill” which Spoonflower doesn’t make anymore – instead, they have Heavy Cotton Twill ($32/yd) and for the fat quarter needed for the project,  the cost is $17, plus $2 for shipping brings us to a total of $19 for the fabric.  The fleece I had lying around, so I have no idea what the cost would’ve been.  The puff of stuffing for the lens I snagged from a stuffed toy the boydog had mostly eviscerated (he won’t miss pulling out one teensy bit of stuffing, right?).  The velcro I did have to buy, and that was $1.99 for four sets of .75″ rounds, so only $.50 for the one set I used.  Total project cost was under $20 which isn’t too bad!  Between cutting out the fabric and sewing I think it took about an hour, and I’m no sewing expert.  The pattern is VERY well marked and the instructions thorough, so that helped make it go fairly fast.  The hardest part, by far, was turing the strap inside out which, in hindsight, I probably could’ve sewed right-side-out instead.

Overall?  I’m pleased!  The Rhianna fits very well inside the case, the stuffed lens bit does a great job of protecting the camera lens, and the bag is super fun to carry around.  Plus, there’s a satisfaction and pride in knowing that this is something I made with my own two hands instead of bought in a store.

In spite of the poll very clearly going to the border I made from last week’s lesson, the design wasn’t sitting right with me.  There was too much room at the top/bottom and it looked funny with the collage blocks added in.  Something about the unused space at the top and bottom was unsettling and I didn’t like it.  I appreciate the feedback, of course, but, I gave it a week to settle in my brain and I’m really liking the polaroid option (below).  Plus, I found a cute camera  fabric to work as a backing, so I sampled the blue from the backing fabric image and am using it as my background.  I think this creates a more cohesive quilt – the cameras on the backing fabric, the polaroid frames on the front.

That out of the way, Lesson 4 goes on about how to place the collage blocks and order fabric.  The fabric we designed for in the tutorials is the Organic Cotton Sateen at $27/yard (ouch).  Any other fabric though and the quilt wouldn’t have been long enough, so I get it, but the fabric is pretty expensive.  The custom quilt front I designed came with a designer discount, so that was $24.30.  The quilt label, also printed on Organic Cotton Sateen, I ordered as a test swatch (8″x8″) for $5, containing 6 labels.  The total for the fabric is $59, shipping is another $6, for a grand total of $62.30.  It’s not cheap, but for custom organic cotton fabric, I really can’t compalin.  I decided it would be easier, this being my first time around sewing a quilt, to use regular quilt binding instead of making my own which would involve  ordering another whole yard of fabric.  Keep it simple, right? 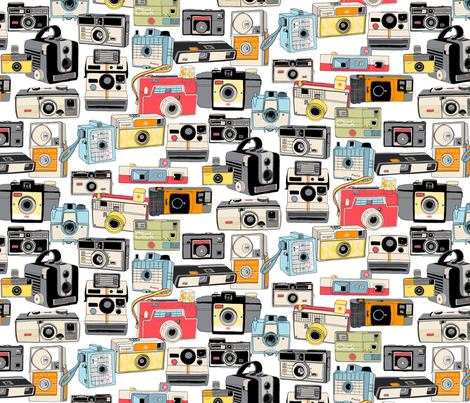 I’m no stranger to Photoshop, so this is really the easy part for me.  I feel like this lesson should’ve been combined with adding the collage squares  because part of making sure the border works is having the content in the center to fit a border around.  I cheated a little bit and added my collage squares  from last week  at 12″x12″ just to see how they lined up to make sure my border worked well.

Finally, I turned to the old album of family photos from the 1980s-1910s.  It’s an absolute treasure because of the age of the photos and the beautiful backs the photographers had made up.  Every photo acted as a sort of business card, giving the family a treasured photo and the photographer a chance to gather more business.  My first choice was this card back, but it didn’t leave me enough room to put photos in the center.  The border was just too wide.  Moving on, I found this one which was perfectly suited for the layout.  The front of the card holds a photo of two unidentified children who I suspect to be children of a friend of the family.  The photographer’s location was somewhat near where my 2nd great grandfather came from, but he was an orphan, adoped by a family who came to the USA in  1872.  I cleaned up the border with some Photoshop magic and pasted it onto my canvas, having selected a color from the Color Guide.  The instructions pointed to a color guide that you’d have to have printed on fabric and shipped to your home and there was just no time for that, so instead, I checked out  this chart  which seems to cover most of the basic web color hex codes.  I ended up not using one from that chart, but set Photoshop to show only web colors and used FFCC99 as a sort of peachy neutral to mimic the sepia color of the back of the original photo as close as possible.  Another factor in chosing the color was that we have two dogs who are just about that color, so the hair is less likely to show.  It’s silly, but it’s definitely something to think about since I plan to use this quilt on the couch.

Lesson Two was this week’s homework – creating collages using PicMonkey.  Typically, this is something I would’ve done in Photoshop, but the PicMonkey interface is really easy to use for this project and made quick work of creating the collage blocks.  Yellow is probably my weakest square (I just don’t take photos of yellow things often enough?), but I like how they all came together!  The Blue and Green are my favorites and happen to be my favorite colors anyway, and the purple one came out pretty well too thanks to my penchant for purple flowers in the garden.  The instructions said that if the colors didn’t work out the way you wanted, you could add effects in PicMonkey to make them fit  better, but I really wanted to leave them as they were.  That means it’s not entirely perfect and each block isn’t exactly perfectly representative of the color, but I think it’s still clear enough that it’s not just a jumble of random photos in each square.  What I love most about this is that it’s almost three years worth of stuff – from flowers in the garden, to showshoeing Mt. Washington, a vacation to Scotland, waffles for breakfast, and having beers with friends, there’s so much life  in these blocks.  Each tiny square holds a special memory.  It’s really exciting to see this coming together, and I can’t wait to order  fabric and get going on the sewing part!

Self Care Sunday just happens to fall on Valentine

Picked up this pretty little potted succulent over